102. How To Crush Those Freelancing Fears

We all have them... those fears and uncertainties that restrict our forward motion. In this episode I share some insights about fear, risk, and consequences, and how you can accelerate through your own freelancing fears and leave them in the dust cloud behind you. 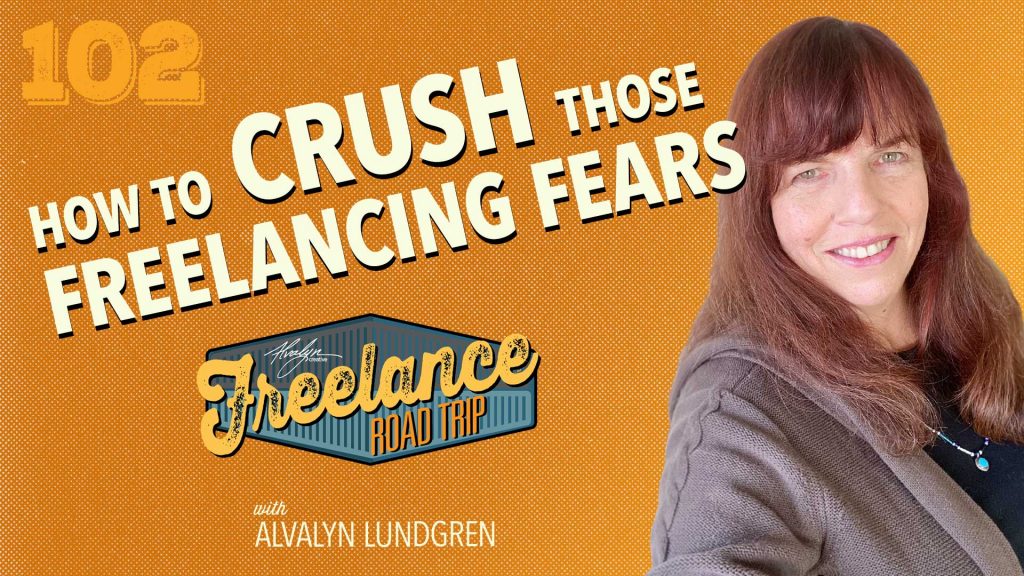 Whether you’re a seasoned freelancer or staring out, working a side gig or freelancing full time, there is always a fear factor.

When we think about starting something new fear comes. Once we actually start moving toward making something a reality, once we stop dreaming and we actually set goals and move forward is when fear tends to kick in.

This is especially true for anybody who has been or will become part of the great resignation for whatever reason; you’re moving from secure employment to unsure self-employment.

It doesn’t matter what you’re starting, whether you’re going to be serving clients or creating product and selling it. One thing we need to overcome is that sense of what if, what if I can’t do this? What if I don’t know how, what if I’m an absolute failure? What if nobody buys my stuff… all those what ifs.

So I want to reframe the getting started idea and talk a little bit about how to overcome that fear because, in order to do anything new, we have to go through a period of doubt.

Something that’s kind of typical about me is the fact that I don’t move forward until I have an idea what to do. If I don’t know how to do something, or I don’t have any idea I have even the first step to take, I will stay where I am. In a way this is related to fear. It’s a not knowing how things are going to turn out. It’s not knowing which step to take that are going to lead me to the greatest success.

Starting a freelance business requires a step of faith.

Fear will get in the way. Fear will actually keep a lot of people from doing anything. I’ve worked with many freelance creatives over the years, helping them set up and plan out their marketing, set up their business and prepare to start, but they never do get started. So they spend all that time and effort and never pull the trigger on it. They never move. And they’re stuck perpetually.

We tend to think that we already know how things are going to turn out and therefore we’re not going to take the leap. I’m sure everybody’s experienced this sense in some manner. Nobody is immune or nobody is unaware of this aspect of life.

Fear is an emotional response that rises whenever we perceive a threat. It actually causes changes in our system. It has a physiological effect on us. Responses to fear range from hiding out to escaping to being paralyzed from doing anything.

Fear can come from not knowing what to do. It can be caused by opposition, and for freelancers that can be opposition from friends and family members. It can be lack of funds or other resources. Or it’s just fear of the unknown. We want to be certain before we make a move.

Fear is often defined as an acronym: False Evidence Appearing Real. What I’ve learned from the years I’ve been in business is that facing a fear actually gets rid of the fear. And that’s not just acknowledging it, but going toward it and saying, “Okay, this could happen, but I’m gonna do this anyway. Because I have a conviction in my heart and my gut, and my soul and my spirit that it’s the right thing to do.”

So fear can seem real. But most of the time you have nothing to fear.  We human beings fear things that never come to pass. And we let these imaginations rule our decisions and our actions.

Every change you make, every new thing you endeavor to do involves some risk.

Risk is basically weighing the danger that you’re stepping into versus the reward.  Often we will not do something because there’s too much risk involved, — we might lose too much. A more effective way to evaluate risk is to ask what’s at stake if you don’t make the move? What’s at stake for you, and the people who rely on you if you don’t step out and do this thing?

Fear is a good thing in a lot of ways. It keeps us from doing stupid things. It’s protective. But if it’s holding us back from what we need to do to succeed, then it’s not a benefit.

No one starting out in freelancing knows exactly what lies ahead. And I think that’s an important thing to understand. There’s always risk in setting out on a new road. We don’t know what’s going to happen. Facing fear requires courage.

When we face our fear, we develop courage. Courage is moving forward in spite of the risk. It’s taking that step even though you don’t know what’s ahead. Courage, is the first step of success.

It takes courage to step into something new. That builds competence or capability. Capability leads to confidence. And then confidence leads to courage to take the next step because you’ve already succeeded in a previous thing or a lesser thing. There’s no reason to think you won’t succeed in the next thing or the greater thing. You’ve already had success. You will have success in the future.

So courage allows you to see the possibility, to assess the risk, and move forward knowing what’s at stake. It allows you to look at the fear from the other side. of it saying, “Well, if I don’t take this step, if I don’t build this business, if I don’t shift gears, if I don’t seek this kind of clientele or this ideal client, what will happen?”

What are the results of inaction?

You can’t let fear determine your business decisions. Making any sort of decision out of fear is going to land you basically where you don’t want to be. It’s going to put you in the ditch by the side of the road. If you wait for the perfect time to start freelancing it will never come. You’ll be in the same place a year or two from now as you are where you are right now.

We fear loss, we fear harm. Those are risks in any business venture. I’ve come to understand that facing the fear actually going toward it, kind of like the account of David and Goliath. David didn’t wait till Goliath showed up on his doorstep. And he didn’t wait around for others to take the first step. He went and got his five stones and his slingshot and he faced the fear directly and he overcame it. He took steps of faith toward the fear and vanquished the fear and took it out.

When you were learning to walk you fell down a lot. You stood back up and kept walking. You learned to ride a bicycle by tipping over but you got back on the bicycle and you kept going and you learned in the failure, how to succeed.

How do we push through fear?

Good question. Because to get anything accomplished that’s what we have to do. It becomes easier to push through fear when we keep the goal in mind. We keep our eye on the prize and we press on to attain that prize that we set out there in front of us — whatever that is.

Achieving the purpose accomplishing the goals that we’ve set, whatever that thing is that we’re going toward your reason for freelancing your reason for being your divine calling your ultimate purpose. Everything you do is a stepping stone toward that fear comes along and tries to hold you back. But fear is overcome. Fear is also a choice that we make. We’re not supposed to fear we’re supposed to fear not. When we do stay in a fearful state when we allow fear to rule our actions. It leads to inaction. Obviously, it builds a boundary or a wall around us so that we can’t move forward. So it leads to inaction. We stay stuck.

Fear leads to anxiety, despair, and panic. There’s a physiological, psychological and a spiritual aspect of fear. It hits on all three levels. And I’m no psychologist but in my experience as a human being living life for as long as I have, fear has been proven to be overcomable. Sometimes you need help — you need professional help to work through it. But fear is not the preferred state of any human being.

You can’t make good decisions out of fear. Some of the things we fear as freelancers our lack of experience, not knowing not knowing what to do. We fear not having enough time, enough money, enough resources. All of those are overcomable. We just need to take action, ask questions, utilize the resources we do have and develop additional resources. We keep the goal in mind so we can move through the fear, get past it, and get going.

We step into the fear. We acknowledge it, we call it what it is. We face it and we say I’m going for it get out of my way. And the thing is that as soon as you take that first step toward it, it actually starts to crumble.

So just like Goliath wasn’t expecting David, your fear is not expecting you.

Will you support the Freelance Road Trip Podcast?

If you enjoy the Freelance Road Trip Podcast, would you consider supporting it? Your gift will help me to continue creating new shows, answering your questions, and helping you to launch or tune up your creative business. Be assured that your gift will go directly into creating and producing this podcast and blog content. When you support the show I’ll give you a shout out during a broadcast. Thanks in advance for your generosity!
Processing ...

Tips, ideas, and advice parking in your inbox to help you accelerate your freelance business.

We’re growing a vibrant group of creative freelancers to encourage each other, share resources, and swap ideas. It’s free to join.

Freelancers need support and resources to thrive. Check out these business and policy resources.

PrevPrevious101. The Value Of Our Creative Work
Next103. When Your Client Treats You Like You’re Their EmployeeNext